More and more we can see RC-Bikes on the racetracks.

Modern technical solutions made this possible. A worldwide RC-Bike community has grown and wants to be taken as serious as modelers of other genres.

Some professionals asked us to produce a motor for the use in 1/5 scale RC-Bikes. The motor should not only satisfy the ambitioned racer, it should even convince him.

The 1920 Bike is the consistent realization.

Referring to performance, efficiency and production quality this motor sets new standards also in the RC-Bike scene. Produced according to the attitude of our house.

Already during the introduction period Team JABBER was able to win some national and international Championship titles.

The motor works in triangle (factory state) or star configuration.
rpm per volt – under load: triangle 6270, star 3637
Other specifications on request.

Customers who bought this product also bought the following products: 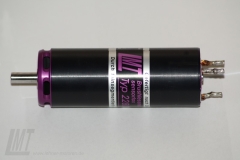